July 19, 2021
Canadian men’s and women’s squads preparing for the Games

A total of 10 athletes are returning from the women’s team that captured gold with a huge victory over the United States at the Lima 2019 Parapan Am Games, which qualified Canada for the Tokyo Paralympics.

The team finished fifth at both the 2018 world championships and Rio 2016 Paralympic Games. Five women from the Rio 2016 team will be in Tokyo – Melanie Hawtin, Rosalie Lalonde, Cindy Ouellet, Tamara Steeves, and Arinn Young, while the other six athletes are set to make their Paralympic debuts – Sandrine Berube, Kady Dandeneau, Danielle DuPlessis, Puisand Lai, Tara Llanes, and Elodie Tessier. Ouellet is the veteran of the team, heading to her fourth Paralympic Games in the sport of wheelchair basketball.

“Representing Team Canada on the international stage is always a huge honour and I’m excited to be going to my second Paralympics,” said Arinn Young. “While it will be a different experience from my previous Games, I am looking forward to building off what we accomplished in 2019.”

“With 10 returning players from the team that won gold in Lima 2019 we are confident in the group heading to Tokyo for the Paralympics,” said Marc Antoine Ducharme, head coach of the Canadian women’s team. “Additionally, the five athletes with Paralympic experience from Rio gives us a good balance of veterans and young talent. I am proud of all our athletes, coaches, and support staff who have worked hard through challenging circumstances to be prepared for these Games.”

The men’s team will led by multiple Paralympic Games medallists Patrick Anderson and Bo Hedges, who are heading to their fifth and fourth Paralympic appearances, respectively. Anderson is returning to Paralympic competition for the first time since 2012 after taking time off from the sport for a few years. Five athletes will be experiencing the Paralympic Games for the first time – Vincent Dallaire, Colin Higgins, Lee Melymick, Blaise Mutware, and Garrett Ostepchuk. Rounding out the squad are Nik Goncin, Deion Green, Chad Jassman, Tyler Miller, and Jonathan Vermette, all returnees from Rio 2016.

Most recently, they qualified for Tokyo with a silver medal at the Lima 2019 Parapan Am Games. Eleven members of that team will also be in Tokyo. At the 2018 world championships, Canada finished 12th while Rio 2016 saw the squad end up 11th.

“This is what we have been training for, and of course, I’m personally elated to be heading to Tokyo for my second Paralympic Games,” said Nik Goncin. “Although the last 16 months have been challenging, we were gifted an additional year to grow as a team. I believe we have the right mix of talent and, more importantly, the right team mindset to have success in Tokyo.”

The Canadian men sit in Group A, where they will battle South Korea, Spain, Turkey, Colombia, and Japan. They will start their campaign on August 26 versus Spain and wrap up the preliminary stage opposite Colombia on August 30.

“We have put together an excellent group with a good balance of veterans and emerging talent,” said Matteo Feriani, head coach of the Canadian men’s team. “We are confident in our ability to compete against the best in the world as we look to return to the Paralympic podium in Tokyo. Our players, coaches and support staff have put in a tremendous amount of time and effort to get prepared for these Games and I look forward to seeing the hard work pay off.”

The wheelchair basketball tournament in Tokyo will run from August 25 to September 5.
Wheelchair basketball has been a premier sport on the Paralympic program since 1960. Canada has been one of the most successful nations in the sport over the past few decades. On the men’s side, Canada has three gold medals (Sydney 2000, Athens 2004, London 2012) and one silver (Beijing 2008). The women were nearly unbeatable in the 90s, posting three consecutive golds at Barcelona 1992, Atlanta 1996, and Sydney 2000, in addition to a bronze at Athens 2004.

“I am so excited to welcome each and every athlete who will wear the maple leaf for the men’s and women’s wheelchair basketball teams in Tokyo,” said Stephanie Dixon, chef de mission, Tokyo 2020 Canadian Paralympic Team. “Canada has such a wonderful, vast history in this sport, which has been one of the cornerstones of the Paralympic Games for years. I know how hard Canada’s wheelchair basketball teams have been working over the past months to train, stay sharp, and build a team environment, and I can’t wait to see it all come together in Tokyo.”

“Both teams have been working extremely hard in preparation for the Tokyo Paralympics,” said Jeff Dunbrack, high performance director, Wheelchair Basketball Canada. “While this past 16 months has been challenging, we’re looking forward to producing results thanks to the efforts that our athletes, coaches and staff have put in. Both our teams are prepared to show they are ready to compete with the best in the world.”

The postponed Tokyo 2020 Paralympic Games will take place August 24 to September 5, 2021 in Japan. Canada is expecting to send a team of approximately 130 athletes, and audiences across the country will be able to follow all the action live through coverage from the Canadian Paralympic Media Consortium, including broadcast partners CBC/Radio-Canada, AMI, and Sportsnet, and digital partners Twitter, Facebook, and MXZN. 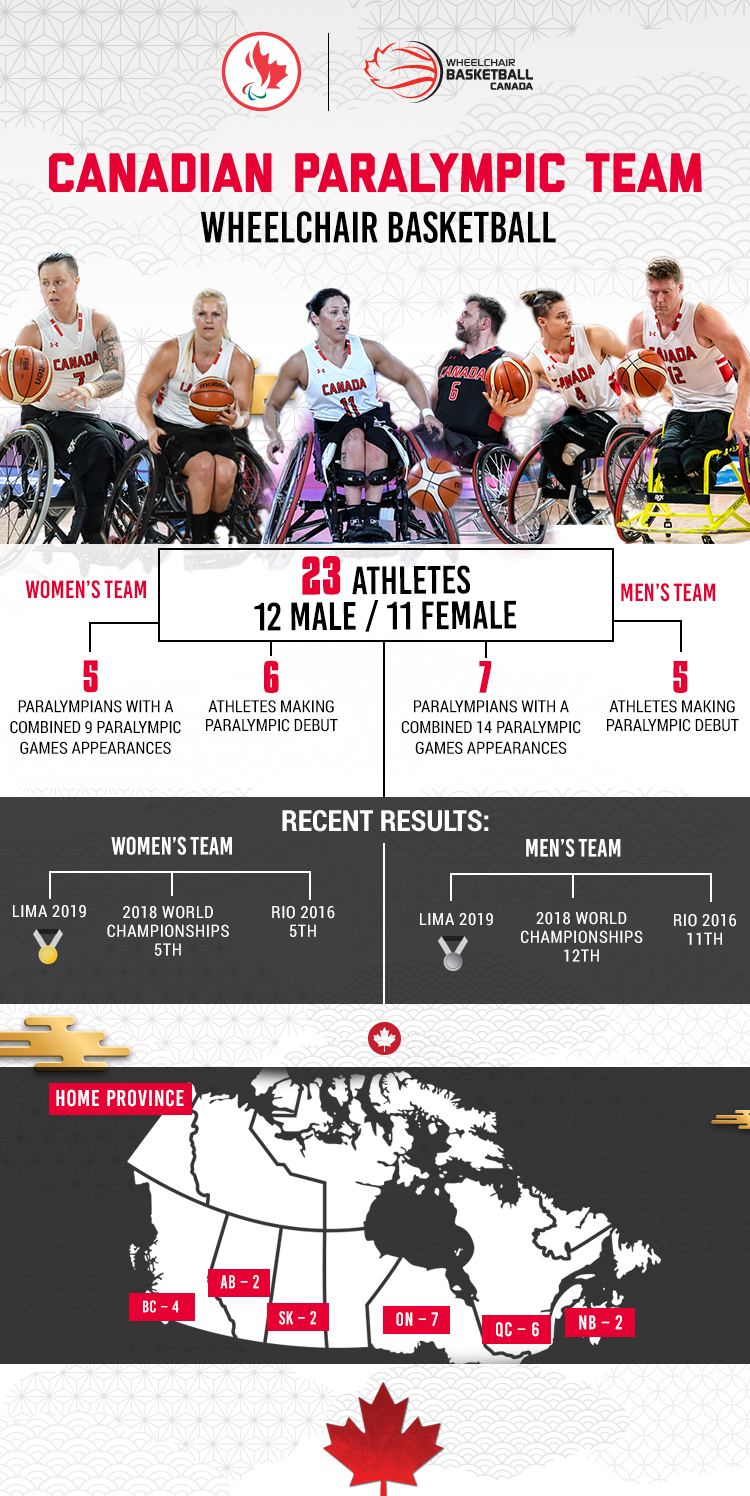