OTTAWA – The Canadian Paralympic Committee (CPC) and Athletics Canada have announced Canada’s Para athletics team selected to compete at the Tokyo 2020 Paralympic Games next month. A total of 16 athletes will represent the country in track and field events, including seven women and nine men.

“I am deeply thankful, proud and honoured,” said F38 discus world record holder Renee Foessel. “To have the opportunity to demonstrate the years of dedication to this sport on a platform where I can represent a country that I am so incredibly proud of is beyond words. I cannot wait to wear the red and white with my head held high.”

“It means so much to me to be selected as part of Team Canada,” said T38 1,500-metre world champion and world record holder Nate Riech. “My first thought goes directly to the sacrifices my family has made to get me to this point. My mother (pole vaulter Ardin Tucker) had me during her prime and always prioritized me, which wasn’t always beneficial for her athletics career. Crazy to think 16 years ago, a doctor told me I’d never play competitive sports again and now I’m a Paralympian.”

“The truth is, I’ve never worked harder for anything in my life,” said first-time Paralympian Charlotte Bolton, the Ontario thrower and owner of three Canadian records. “As soon as I was told that the Paralympics were delayed until 2021, I had it in my head that I was going to go. There was no way I would have made it with the level I was at in 2020, but I’ve put my blood, sweat and tears into improving this year to qualify even though the original plan was Paris, not Tokyo. It’s really gratifying to see that the hard work I, my coaches, and all the other people supporting me have put in pay off in the end.”

Members of Canada’s Para athletics team earned their nomination for Team Canada by their World Rankings position as of July 20, 2021.

“It’s been a difficult couple of years, but the goal that all athletes work towards is finally here,” said seven-time Paralympic medallist Brent Lakatos, who is heading to his fifth Paralympic Games. “I can’t wait to finally line up against the best in the world. I will do my best to have our national anthem playing as many times as possible."

“The one thing that never changes at any competition for me is the goal of always enjoying what I am doing and to have fun. The goal for Tokyo 2020 is to do exactly that, and to really take in every moment while I am in it,” said Foessel. “Going into the Games, I am the current world record holder, but I have a very close and competitive field of strong women surrounding me. On game day, the potential is high to see some remarkable performances. I am aiming for my first ever Paralympic medal and that is what is driving my training.”

“Wearing the Maple Leaf across my chest at the Games has always been a dream of mine and it has now turned into a reality,” said Riech. “As for my goals heading into the Games, there’s only one: to win. That’s always been my mentality and that certainly isn’t going to change now.”

Canadian track and field athletes earned eight of Canada’s 29 medals at the Rio 2016 Paralympic Games – including three of the country’s eight gold medals. Returning medallists from Rio 2016 are Lakatos and Stanley.

At the 2019 World Para Athletics Championships in Dubai, Canada left with six medals, led by Lakatos’ two golds and one silver. Riech scored Canada’s other gold medal, earning his first world title in the T38 1,500 metres. Stewart and Foessel shone in the throwing events, each collecting Canadian records with their medal performances. Stewart took silver in the F46 discus, while Foessel took F38 bronze in the discus.

“This group of selected athletes have displayed incredible resiliency and commitment to prepare for Tokyo through these tumultuous times, which will set them up very well for success at the Games,” said Canada’s Para athletics head coach, Carla Nicholls. “Every one of these athletes are going into the Games ranked Top 8 in the world or better. The diversity within the team sets our team up exceptionally well for success with experienced, veteran world-class athletes such as Brent Lakatos, Guillaume Ouellet, Renee Foessel and Jennifer Brown, along with first-time Paralympians with World Championship podium performances under their belt like Nate Riech and Greg Stewart, and rookie athletes such as Charlotte Bolton who is currently ranked fourth in the world.”

The team will convene in Gifu, Japan, on August 16 and will train at Nagaragawa Athletic Stadium until August 23 before travelling into Tokyo. Para athletics competition will take place from August 27 to September 5 at Tokyo Olympic Stadium.

“A very warm welcome to all 16 athletes who will represent Canada in Para athletics in Tokyo!” said Stephanie Dixon, chef de mission, Tokyo 2020 Canadian Paralympic Team. “This is a fantastic group of talented and motivated athletes who have been training so hard and putting in many impressive performances leading into the Games. I can’t wait to see them all compete in Tokyo, and I know Canada will be proud of each of them.”

The postponed Tokyo 2020 Paralympic Games will take place August 24 to September 5, 2021, in Japan. Canada is expecting to send a team of approximately 130 athletes, and audiences across the country will be able to follow all the action live through coverage from the Canadian Paralympic Media Consortium, including broadcast partners CBC/Radio-Canada, AMI and Sportsnet, and digital partners Twitter, Facebook and MXZN. 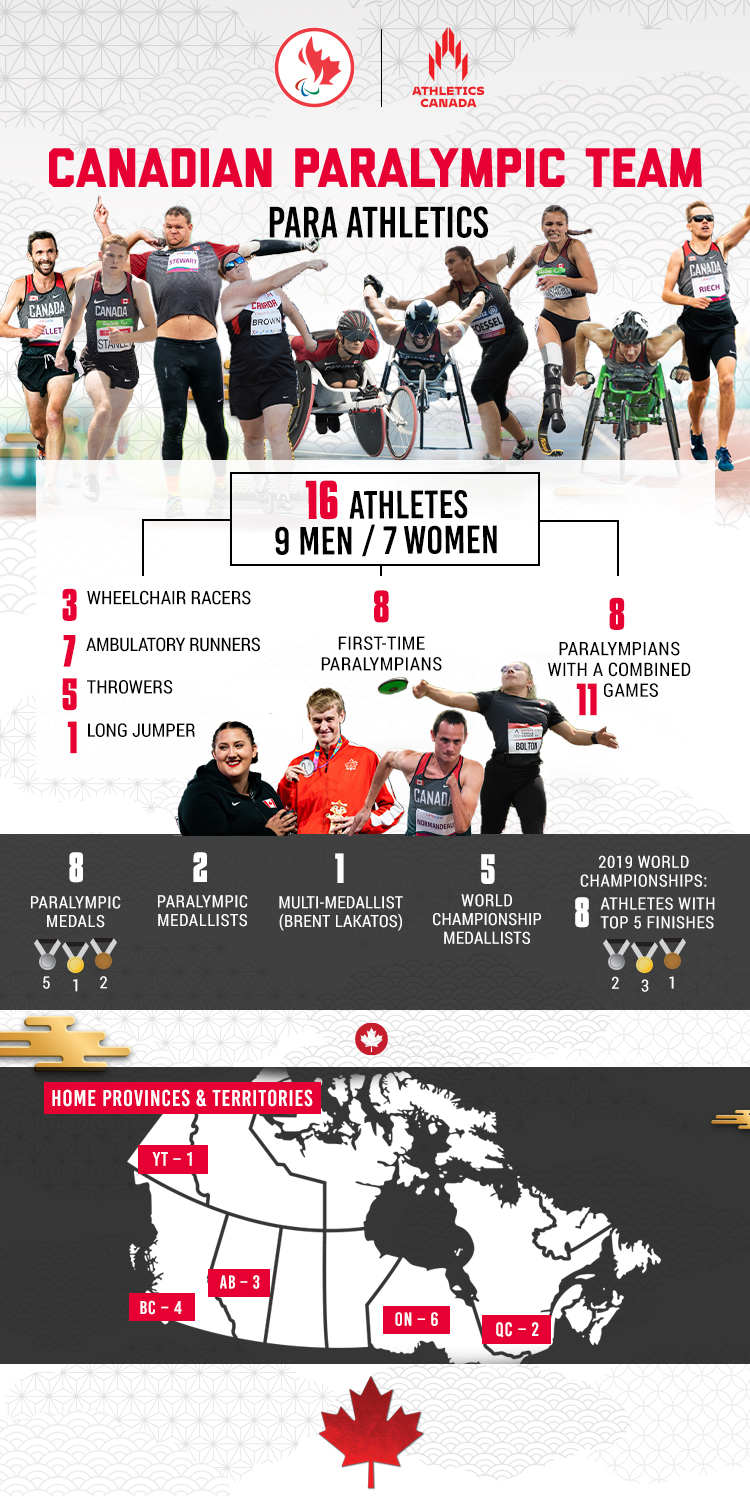