OTTAWA – A team of four Para dressage riders and their horses will be competing for Canada in Para equestrian at the Tokyo 2020 Paralympic Games next month, the Canadian Paralympic Committee (CPC) and Equestrian Canada announced today.

Barwick is the most experienced athlete of the team, heading to her fifth Paralympic Games, with Sandrino. One of Canada’s most decorated riders, she made her Paralympic debut 17 years ago at Athens 2004 and is a two-time medallist from 2008, earning gold in the freestyle and silver in the individual event in the Grade II classification. She will now compete in the Grade III events in Tokyo.

“It takes commitment, hard work and time to nurture our equestrian craft,” said Barwick.  “Over the past five years, Patsy Fyfe helped me acquire Engelbrecht with hopes he would go all the way to Tokyo. He ranked top eight at the World Equestrian Games [WEG] and then had an injury. I met Lee Garrod at WEG and she stepped up and helped me find Sandrino and has been an incredible owner. I want to go to Tokyo and honour both horse owners as without Patsy, I would never have met Lee. My Para equestrian career feels like a marathon and I’m excited to be Canada’s choice.”

Hartvikson will be making her Paralympic debut at the age of 62 aboard Onyx. She has been involved in dressage in multiple roles for more than 30 years but has been a member of the national Para equestrian team since 2017. She competes in the Grade I class and earned a 10th-place finish at the World Equestrian Games in 2018.

“I began thinking about making the Paralympic team for Tokyo in 2017,” said Hartvikson. “It was a long time coming into Para sport. Then, it became a huge and exciting focus to compete to the best of my abilities on a level playing field. When I go to Para competitions, disabilities no longer exist.”

Schloss, who will be competing aboard Lieutenant Lobin, is heading to her second Paralympic Games after first competing at the London 2012 Games. She had two 11th-place finishes in London in the Grade I category and helped Canada to an eighth-place result in the team event.

“I am very excited to be competing for Team Canada in Tokyo,” said Schloss. “Lobin and I are training hard. My superstar is impressing me with how well he is doing! It feels like I have been preparing for this for a long time. I could never have realized my dream without my team that supports me.”

Sheffield is a returning member of the Rio 2016 Canadian Paralympic Team, where she placed 14th in the Grade III individual event in her first Games. She joined the Canadian team in 2013 after previously competing for Great Britain.

“I cannot describe how it feels to be nominated for Team Canada for Tokyo with my heart horse, Fairuza,” said Sheffield. “It is such a huge honour to represent my country, such an incredible journey, so many twists and turns. There is nothing like wearing the maple leaf.”

Para equestrian at the Paralympic Games is contested in three dressage events – individual and team tests where movements are pre-determined, and a freestyle test where the riders choose their movements. Athletes compete in five separate classifications, which are mixed gender, based on their level of impairment from highest to lowest: 1a, 1b, II, III, and IV.

Para equestrian competition will run from August 26-30 in Tokyo.

“I am very excited and proud to be working with this team of athletes,” said Clive Milkins, Para-Dressage Chef d’Equipe. “In some ways we are still a developing team, working closely together to create the best possible environment for everyone to build on their own personal performances. Although there is no doubt Tokyo and COVID-19 have thrown us many challenges, I know that Canadian equestrian athletes will rise to the occasion and deliver their best performances.”

Canada has won four Paralympic medals in equestrian. Barwick holds a gold and silver from 2008, while Karen Brain won two bronze at Athens 2004.

“Congratulations to Lauren, Winona, Jody, and Roberta for qualifying for the Tokyo Paralympics!” said Stephanie Dixon, chef de mission, Tokyo 2020 Canadian Paralympic Team. “This is a great group of athletes who I know have committed so much to being able to compete at these Games. I wish each of them the best of luck with their final preparations, and I look forwarding to supporting them and their horses in Tokyo.”

The postponed Tokyo 2020 Paralympic Games will take place from August 24 to September 5, 2021 in Japan. Canada is expecting to send a team of approximately 130 athletes, and audiences across the country will be able to follow all the action live through coverage from the Canadian Paralympic Media Consortium, including broadcast partners CBC/Radio-Canada, AMI, and Sportsnet, and digital partners Twitter, Facebook, and MXZN. 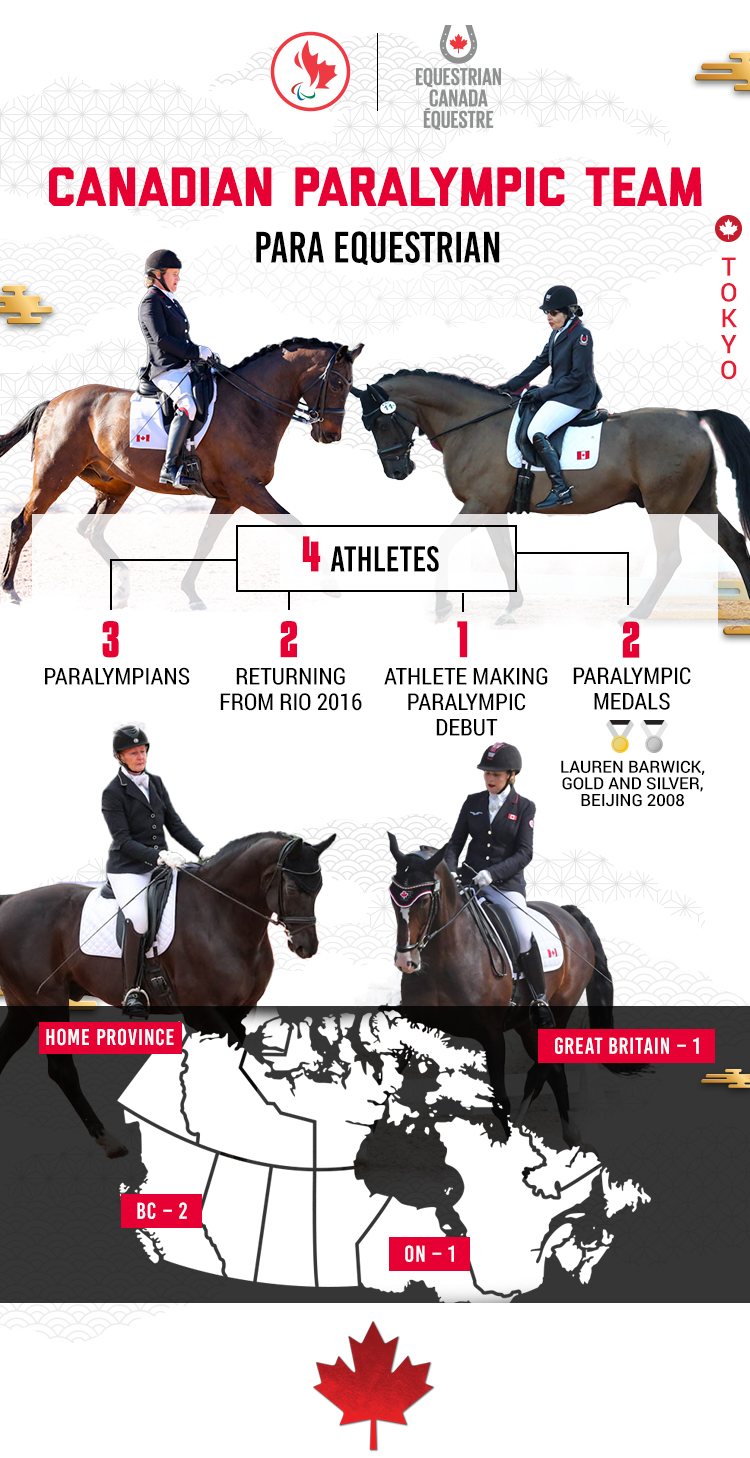