Shaw will be Canada’s sole representative in the sport of wheelchair tennis in Tokyo, having qualified through his world ranking of No. 9 in the quad category. The 31-year-old will be making his Paralympic debut in Tokyo, which will also mark his official return to competition for the first time since the fall of 2019.

He captured a total of eight singles titles on the International Tennis Federation wheelchair tennis tour in 2019. That included a gold medal at the Lima 2019 Parapan Am Games, which was Shaw’s first multi-sport Games appearance. Quad tennis made its Parapan Am debut in Lima and with the victory Shaw became the first Canadian tennis player, stand-up or wheelchair, to win a medal in singles at a multi-sport Games.

"These are the types of moments you dream of as an athlete; representing your country on the largest stage possible,” said Shaw, who currently lives in Kelowna, BC where he is completing his PhD in addition to training. “I can't wait to test my skills against the best in the world and put all of this training into my performance. I know the Games will be unique because of Covid, but as a first time Paralympian I'm just focusing on competing.”

The quad draw in Tokyo, played on hard courts, will feature 16 athletes. The singles first round will kick off on August 28, followed by the quarterfinals on August 29, semifinals on August 31, and medal matches on September 2.

“Tennis Canada is excited to support Rob in his final preparations leading to the Paralympic Games in Tokyo,” said Janet Petras, director of high performance programs & administration, Tennis Canada. “Rob is an outstanding athlete who has achieved the highest level within the sport despite a very challenging year due to the COVID-19 pandemic. We will be cheering him on from Canada.”

Shaw will be supported in Tokyo by team leader and coach Kai Schrameyer.

Wheelchair tennis has been part of the Paralympic program since the Barcelona 1992 Games. The sport is played in singles and doubles competition in three different categories – men’s, women’s and quad. The rules are identical to stand-up tennis with the exception that the ball is allowed to bounce two times before being returned over the net. Canada has not yet won a Paralympic medal in wheelchair tennis, with its best showing a fourth-place finish in quad doubles by Sarah Hunter and Brian McPhate at Athens 2004.

“I am thrilled to welcome Rob to Team Canada for his first Paralympic Games!” said Stephanie Dixon, chef de mission, Tokyo 2020 Canadian Paralympic Team. “It was so exciting to cheer on Rob in the gold-medal match at the Parapan Am Games two years ago. I know it will be a big return to competition for him in Tokyo, and I look forward to supporting him again.”

The postponed Tokyo 2020 Paralympic Games will take place August 24 to September 5, 2021 in Japan. Canada is expecting to send a team of approximately 130 athletes, and audiences across the country will be able to follow all the action live through coverage from the Canadian Paralympic Media Consortium, including broadcast partners CBC/Radio-Canada, AMI, and Sportsnet, and digital partners Twitter, Facebook, and MXZN. 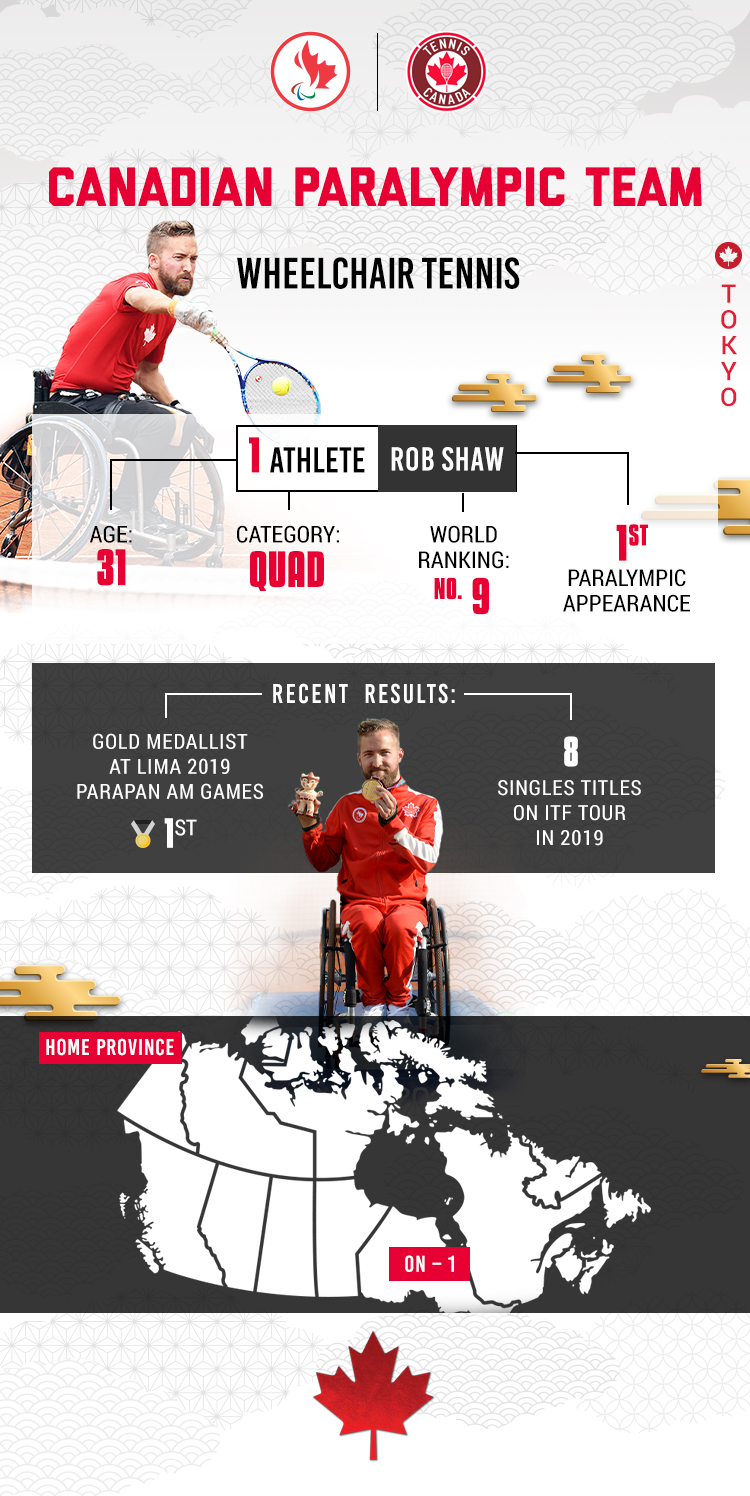