When a Para ice hockey try-it was held for the first time in Prince George, BC a couple years ago, it was clear there was a demand for the sport.

That’s where a local community organization called Northern Adapted Sports Association (NASA) came in. The only problem was, Para ice hockey equipment can be quite expensive.

“We had a year where we borrowed equipment from BC Hockey, they sent it up from the island, and we got a little bit of ice time,” said Rob Stiles, program coordinator at NASA. “The major issue was the equipment came in November and they needed it all back in January. So we had a few sessions, about 20 people out each time, and we were just getting to the point where people could move around on the sleds, and then we had to send all the equipment back.”

And of course, it’s not just sleds that are needed to run programming. Equipment needs also include things like sticks, helmets, and elbow pads, and NASA wanted to make sure to have all this available for anyone who wanted to participate.

But this past year, Northern Adapted Sports Association received $10,000 of funding from the Paralympic Sport Development Fund, a Canadian Paralympic Committee grant that supports Para sport development programs. They now have 20 sleds and all the gear required, dedicated for use in Prince George.

“This is what helped make the program happen,” said Stiles about the grant. “Without all the equipment it wasn’t possible.”

And now, NASA runs regular weekly programming through the winter, and they’ve created a welcoming, supportive, team environment among the participants, most of whom are between the ages of 14-22. Now people with a disability in Prince George, along with family members and friends, have the opportunity to play together out on the ice. 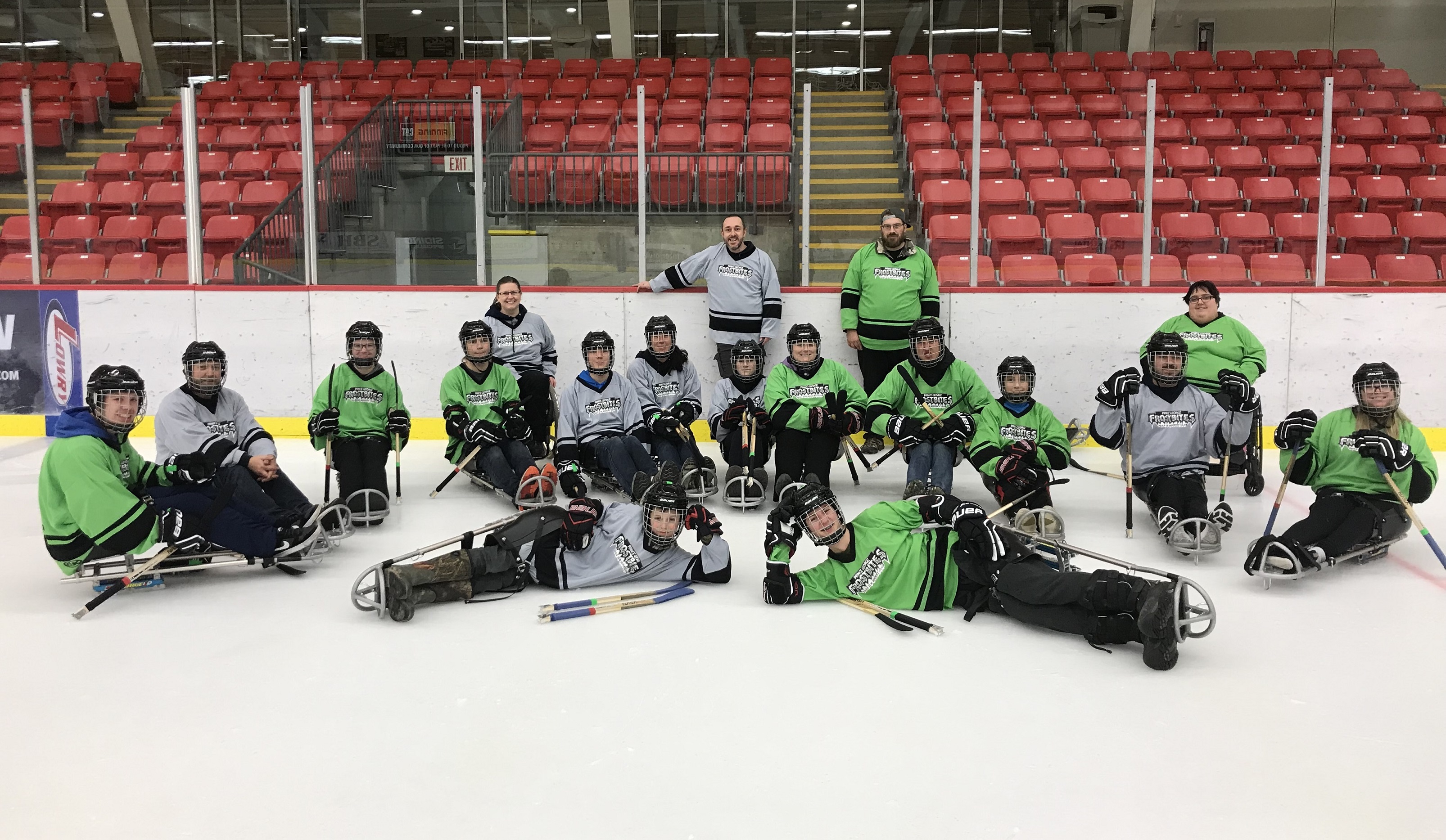 Stiles is originally from England but moved to Prince George with his wife Brandy about 15 years ago. Brandy, who has a spinal cord injury, got involved in wheelchair basketball but that was pretty much the only Para sport on offer at the time in the area. The Stiles family decided to fill the gap.

“We had a vision that there would be some place you could go to if you arrived in Prince George or anywhere in Northern BC and you wanted to know what was out there or you wanted to try something. We could be a hub, a one-stop shop. If you called us and asked if there was any skiing program with sit skis, we would say yes and point you in that direction.

“And if you asked for something that didn’t exist, we would find a way to make it happen,” said Stiles.

Northern Adapted Sports Association facilitates people getting involved and finding their sport of choice. In addition to Para ice hockey, NASA – which is fully volunteer-run – is also involved in running wheelchair basketball and school programs, and it partners with outside organizations to assist with others, such as wheelchair rugby.

Stiles says grants like the Paralympic Sport Development Fund are important because for organizations like his, it’s a huge investment to run programming. But there are already so many barriers to people with a disability being physically active (such as income, location, accessibility, lack of options), he is always looking for new ways to provide equitable access to sports.

“It’s kind of a perfect storm where everything is against individuals getting out and doing anything active. Then we add in the health issues that come with not being active, for everyone in the community, and more challenging when you have a physical disability, it really just piles on top of each other.”

Applications for the 2020-21 Paralympic Sport Development Fund are now open. For more information or to apply, visit Paralympic.ca/funding-opportunities.