TORONTO – On Monday, Hudson’s Bay, the Canadian Olympic Committee and the Canadian Paralympic Committee revealed the Tokyo 2020 Team Canada Collection athletes will wear at the Olympic and Paralympic Games in 2021. The launch supports the Team Canada Return To Sport program as athletes prepare for their extended road to the Games. The Team Canada Collection, which includes athlete outfits for Opening and Closing Ceremonies, Podium, and Athletes’ Village, is available for purchase now in-store and at thebay.com. The Collection has become an important symbol of national unity with purchases supporting athletes who represent Canada on the world’s biggest sporting stage.

“As the Official Outfitter of Team Canada, Hudson’s Bay has heard firsthand the strong sense of patriotism our Canadian athletes feel when they wear their official Team Canada uniforms,” said Iain Nairn, President and CEO, Hudson’s Bay. “By unveiling the collection now, our goal is to inspire athletes and fans to keep the spirit and momentum of Team Canada strong and support our athletes looking to compete in Tokyo next summer.”

Proudly designed by Hudson’s Bay’s in-house team, the 26-piece Collection seamlessly blends classic fashion pieces with a street style aesthetic for a collection that is fashionable and unapologetically Canadian. New for the Tokyo Olympic and Paralympic Games, Hudson’s Bay collaborated with iconic denim brand Levi’s® to design key elements featured in both the Opening and Closing ceremony looks.

“There is something quite special that I can’t really explain when an athlete receives their Official Team Canada Collection at the Olympics. It is a symbol of pride and honour of representing your country on the biggest stage,” said Erica Wiebe, Olympic Champion and Hudson’s Bay Bursary Athlete. “Once again, Hudson’s Bay has done an amazing job of representing Canada through the Collection. With a portion of sales supporting Team Canada with our return to sport, I encourage everyone to purchase the Collection and wear it proudly!“

“Competing at the Paralympic Games is a culmination of so many years of hard work, dedication and commitment, and putting on the official Team Canada gear for the first time at each Games is truly one of those moments where it all comes together,” said Katarina Roxon, Paralympic swimming champion. “Hudson’s Bay has created another wonderful collection of clothing for us athletes to wear. We feel such immense pride representing Canada and wearing the red and white maple leaf, and are excited to wear these clothes at next summer’s Paralympics.” 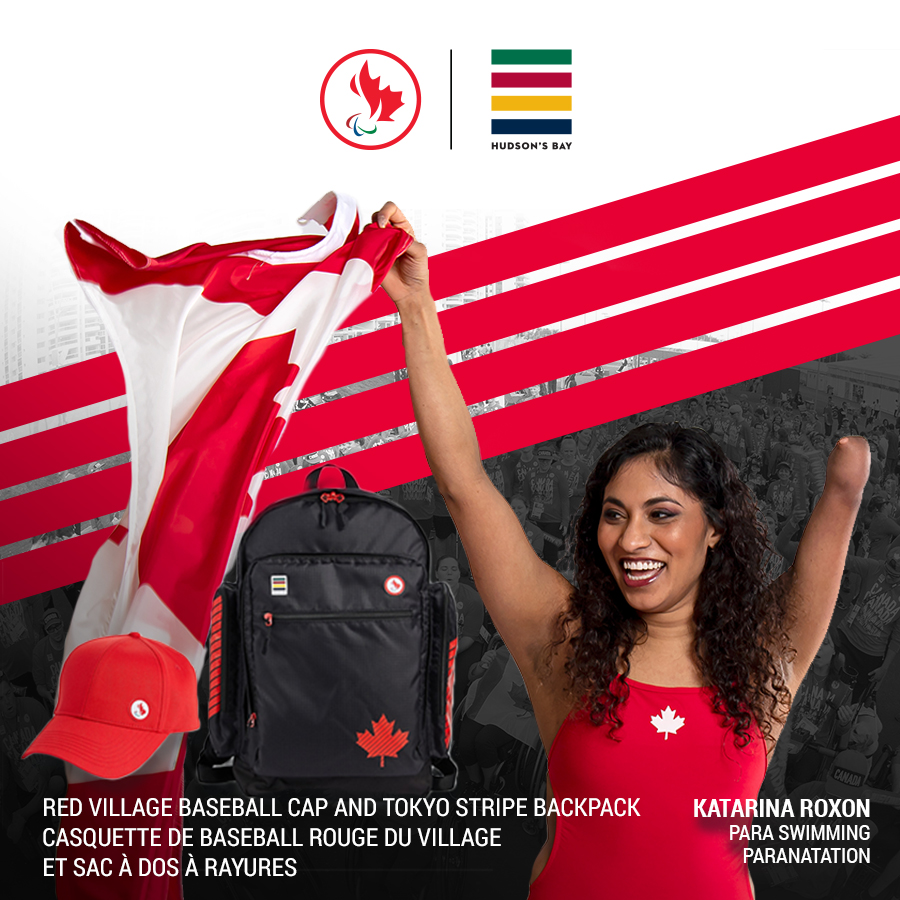 Striking in its simplicity and based in the power of Canada’s colours of red and white and the Maple Leaf, the Team Canada Opening Ceremony look was designed with fashion and functionality in mind. The Opening Ceremony Jacket is red, with a zip-closure and features a bold Maple Leaf centered on the back with 13 stripes representing the unity of Canada’s 10 provinces and three territories. The jacket is made of water resistant lightweight nylon and will be paired with a clean white T-shirt made of fast-drying lightweight jersey for comfort. The T-shirt features a Maple Leaf placed proudly inside a red circle at the chest. The combination is styled with a pair of Levi’s® white 502™ Taper jeans  for men and 721™ High Rise jeans for women, which is also a prequel to the Closing Ceremony look.

Designed exclusively for athletes, the Podium look draws inspiration from classic athletic jackets that embodies team spirit. The lightweight, knit jacket features “CANADA” in strong chain-stitch letter detail across the back. The jacket is paired with a dry fit jersey T-shirt layered underneath. Athletic track pants with an unexpected Canada graphic on the back leg complete the look.

The Closing Ceremony uniform pays tribute to Tokyo, the fashion-forward host city, in a unique and artistic way. Inspired by graffiti and streetwear, Hudson’s Bay collaborated with Levi’s® on the hero piece of the collection - a unisex trucker jacket that celebrates inclusivity and gender neutrality. The jacket features graffiti inspired graphics and wordmarks across the front and back including the iconic Hudson’s Bay Stripes, the Official Canadian Olympic or Paralympic Team patch, the Team Canada patch, a Canadian flag and Canada wordmarks. The collar features two symbolic dates - 1964 – the year Tokyo first hosted the Olympic Games and 2020 to represent the year the Games were set to take place. In addition, the jacket features the official Tokyo 2020 emblem patch, and the “13-stripes” Maple Leaf patch. To showcase the friendship between Canada and Japan, the jacket also features “Canada” spelled in Katakana, a Japanese syllabary. The jacket also pays homage to Paris, the host city for the 2024 Olympic and Paralympic Games.

The jacket will be paired with a striking black T-shirt with the Maple Leaf set in a metallic gold circle as a tribute to Team Canada’s success. The ensemble is completed with authentic Levi’s® white jeans as seen in the Opening Ceremony attire for a look that is a strong nod to the classic Canadian tuxedo.

The full Team Canada Collection is available now at Hudson’s Bay stores across Canada and on thebay.com.