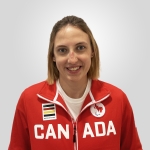 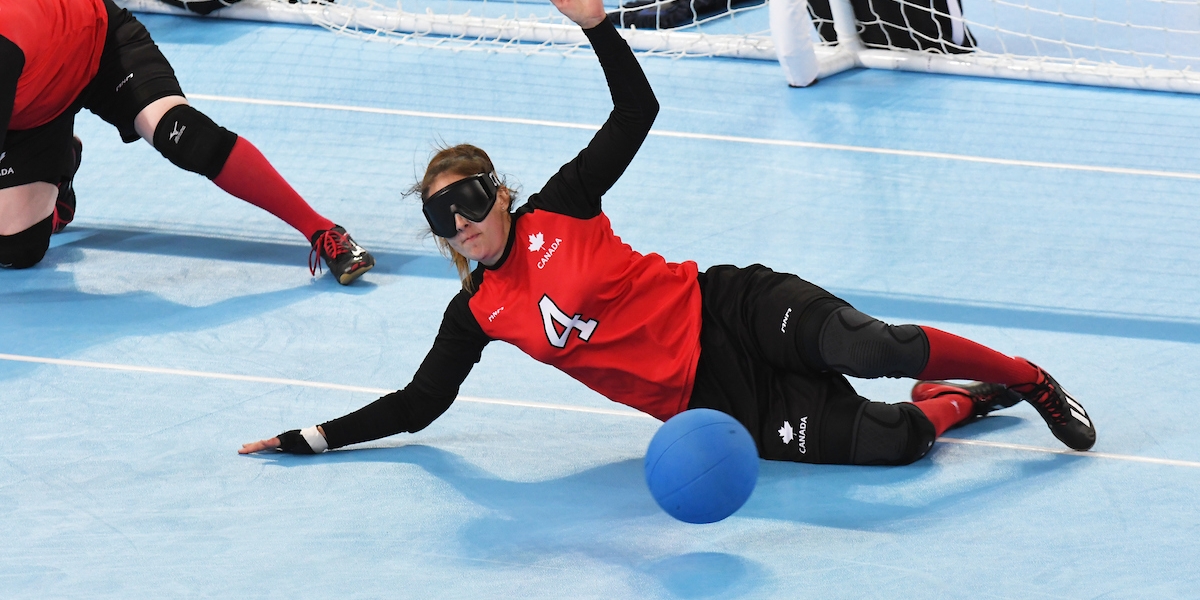 Meghan Mahon wears number four and plays the centre position for the Canadian women’s goalball team. The team secured a spot for the 2020 Paralympic Games when China defeated South Korea in the semifinals at the Asia-Pacific Championships in Chiba, Japan in December 2019.

Mahon has been a member of the team since 2016. She attended the 2019 Parapan Am Games, 2019 IBSA World Championship and Games, 2018 IBSA Goalball World Championship and 2016 Paralympic Games. Mahon was honoured with a large banner with her name on it by her hometown of Timmins, ON for attending the 2016 Paralympic Games. The banner was prominently displayed at an underpass in downtown Timmins throughout the summer of 2016.

As a member of the junior Canadian team in 2015, Mahon won gold at the 2015 IBSA World Youth and Student Games.

Born with a genetic cone-rod retinal condition (achromatopsia) Mahon has 10 per cent vision. Mahone grew up loving all things sport, she tried every sport presented to her: karate, dance, hockey, gymnastics, badminton and beep baseball to name a few. Beginning high school at O’Gornman High School in Timmins, ON, Mahone was very involved in high school sport. She adopted a love for hockey and track and field.

In 2012, Mahon was attending Ontario Blind Sports Association’s summer sports camp when she was introduced to goalball. Mahon didn’t think much of the sport until a year later when she switched to W. Ross Macdonald School for the blind for her grade 12 year and was reintroduced to the goalball. In 2013 she began playing goalball for Team Ontario. Mahon remained at W. Ross for an additional year, graduating in 2015.

In 2017, Mahon graduated with an advanced diploma from the child and youth care practitioner program at Cambrian College in Sudbury, ON. In 2018 she moved to Calgary, AB. She is now a child and youth worker for the Canadian National Institute for the Blind in Calgary and plays goalball for Team Alberta.

Is a child and youth worker for the Canadian National Institute for the Blind in Calgary… Plays goalball for Team Alberta… Loves hockey, snowboarding, camping, hiking… Beginning to explore the world of photography… Has one sibling who was also born with genetic cone-rod retinal condition (achromatopsia)… Grew up playing any sport that was presented to her… Began high school at O’Gornman Catholic High School in Timmins, ON but switched to W. Ross Macdonald School in grade 12, graduating in 2015… Played hockey and track and field in high school… Introduced to goalball at Ontario Blind Sports Association’s summer sports camp in 2012… Born with a genetic cone-rod retinal condition (achromatopsia)…