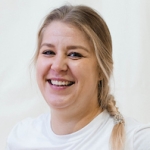 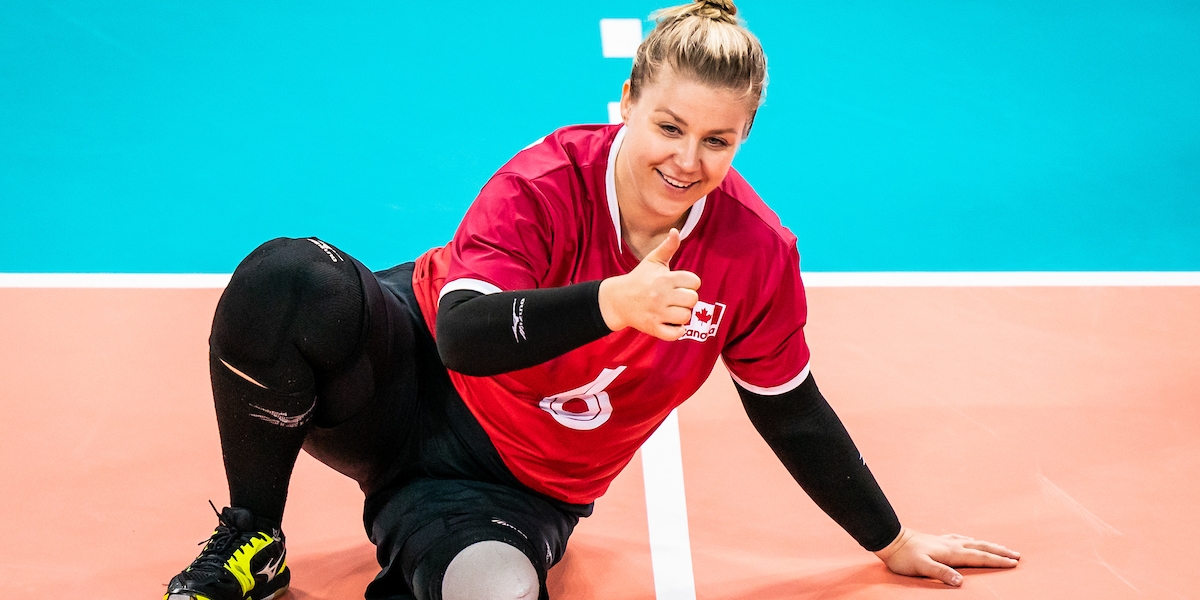 Angelena Dolezar wears number 7 and plays the position of defensive libero for the Canadian women’s sitting volleyball team. Dolezar has been a member of the team since 2015. She attended the 2019 and 2015 Para Pan Am Games, 2018 world championship, 2017 Parapan Am zonal championship and 2016 Paralympic Games.

In 2015 at the Toronto Parapan Am Games, Canada won bronze earning a berth for the 2016 Paralympic Games in Rio; the first time in history a Canadian sitting volleyball team qualified for the Paralympic Games.

Dolezar grew up playing competitive soccer. She played on her high school team at Paul Kane High School, in her hometown of St. Albert, AB. After graduating high school in 2006, she joined a premier level soccer league in Edmonton. Dolezar continued to play competitively until the summer of 2013.

In August 2013, Dolezar was in a tubing accident while at a cottage with some friends. She had released one hand from the tube to tell the boat driver to slow down. The signal was not seen, and the driver turned a corner, resulting in her being flung from the tube and into the wake. Dolezar’s body went one way, and her left leg went the other, resulting in a dislocated knee, fractured tibia, severed popliteal artery behind her knee and internal bleeding in her leg. Although the doctors did all they could to save her leg, in the end, the decision was made to amputate her left leg above the knee.

Dolezar was living in Edmonton (where Canada’s women’s sitting volleyball team practices) at the time of her accident and post-recovery. Through the grapevine, Nicole Ban; current women’s sitting volleyball head couch, heard that Dolezar had been a competitive athlete before her accident. In 2015, Ban reached out to Dolezar, asking if she would be interested in playing sitting volleyball. Dolezar had been missing the team atmosphere that soccer used to provide to her, so she decided to give it a try. She has remained a member of the team since.

Currently Dolezar is a French immersion teacher in the Edmonton public school board. She plans to return to the University of Alberta in the fall of 2021 to begin her master’s in education and counselling.

Lives in Edmonton, AB… Planning to return to the University of Alberta do her master’s in education and counselling … Is a French immersion teacher in the Edmonton public school board… Speaks English, French and American Sign Language… Loves snowboarding, long distance running and hiking… Swims for conditioning… In 2017, was a celebrity coach at Footie Camp in Edmonton… Worked as an administrative coordinator at Alberta Health Service for seven years… Played competitive soccer until 2013… In 2013, lost her left leg above the knee in a tubing accident… Was the first person in Canada to receive osteointegration… In 2015, was the first person in Canada to purchase a bionic leg… In 2012, graduated from the University of Alberta with an education degree… In 2010, graduated with a bachelor of science; majoring in biology and minoring in French literature… Attended Paul Kane High School in her hometown of St. Albert, AB and played soccer for the women’s team…