July 23, 2019
Seven Paralympians heading to Peru as part of team

OTTAWA – Canada will be represented by six men and six women in goalball at the Lima 2019 Parapan American Games next month, the Canadian Paralympic Committee and Canadian Blind Sports Association announced on Tuesday.

Both the men’s and women’s teams captured bronze four years ago at the Toronto 2015 Parapan Am Games and will be aiming for more hardware in Peru. Lima 2019 is a qualifier for the Tokyo 2020 Paralympic Games with the top team not already qualified earning a spot. For both teams, this means Canada must finish second behind Brazil or better to earn their Tokyo ticket at this event.

The Canadian women will be led by veterans Whitney Bogart (a two-time Paralympian), the returning member from the Toronto 2015 squad, and Amy Burk (a three-time Paralympian). The nation finished in sixth place at the Rio 2016 Paralympic Games, and fourth at last year’s world championships. Four athletes – Megan Mahon (who competed at the Rio 2016 Paralympic Games), Abeer (Ruby) Hammad, Emma Reinke, and Maryam Salehizadeh – will be making their Parapan Am Games debut.

“I'm really excited to get to Lima and not only be a part of the goalball team but also to be a member of Team Canada!” said Burk. “The CPC does a great job of supporting all of its athletes and bringing everyone together to be a part of one giant Team Canada family, and there are always lots of great memories that come from events like these. It's a huge honour to get to represent Canada and wear the maple leaf. Our goal is to get this team qualified for Tokyo.”

Canada will compete in women’s round-robin action alongside Brazil, Peru, Costa Rica, Mexico, and USA, with the top four teams advancing to the semifinals.

“The Canadian women's team is confident going into Lima,” said Trent Farebrother, head coach of the women’s national team. “They know they will have to play solid defence and the rest will take care of itself.”

On the men’s side, Canada is bringing four Paralympians to Lima – Bruno Hache, Blair Nesbitt, Doug Ripley, and Ahmad Zeividavi. Four members of the team were part of the bronze-medal squad in Toronto four years ago – Aron Ghebreyohannes, Hache, Nesbitt, and Zeividavi – while Peter Parsons will be making his major Games debut. Most recently, Canada finished eighth at Rio 2016 and 12th at the 2018 world championships.

“The Parapan Am Games is an important tournament to obtain a spot at the Tokyo 2020 Paralympic Games for our Canadian goalball team,” said Hache. “I am very proud to represent Canada alongside our coaches, teammates, and organizers with respect and determination, and to be part of such pursuit of excellence.”

The men will play against USA, Peru, and Venezuela in Pool B action, with all eight participating nations then seeded for the quarter-finals based on their round-robin performance.

“We are heading to Lima with a fearless team and eager to show the changes we’ve worked on all year long,” said Nathalie Seguin, national men’s head coach. “We have athletes that will be at their first Parapan American Games and veterans. All our energy will be directed towards the only spot available to qualify for the Paralympic Games.”

Goalball, played by visually impaired athletes, is one of two Paralympic sports that does not have an Olympic equivalent. Played in teams of three, the aim of the sport is to score by throwing a ball into the opponent’s net. All players wear eyeshades, regardless of the degree of their visual impairment, to ensure everyone cannot see anything. The players use their hearing to track the ball, which has a bell inside it, and orient themselves on the court by feeling for the tactile lines.

“I am so happy to welcome our goalball athletes to our Canadian team!” said Stephanie Dixon, chef de mission of the Lima 2019 Canadian Parapan Am Team. “Goalball is such a unique and fast-paced sport, and I’m really excited to cheer on our teams in Lima as they showcase their best efforts. I know you’ve worked hard to get here, and I wish you the absolute best of luck!” 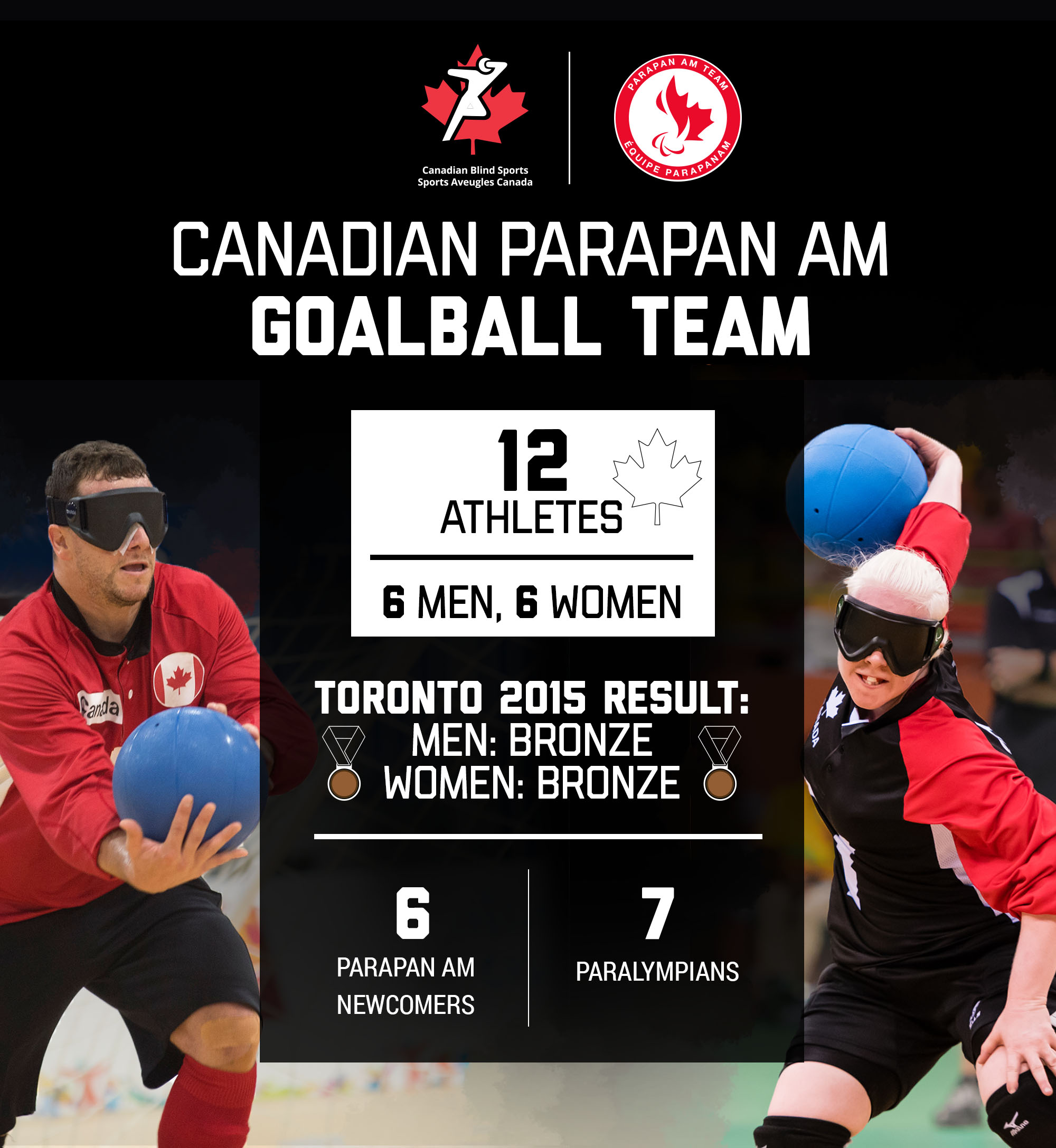