A total of $108,000 was raised to support Para sport in Canada on Friday, as the third annual ParaTough Cup took place in downtown Toronto.

Sixteen teams from organizations across the Greater Toronto Area competed in wheelchair racing, a guided run, Para ice hockey, sitting volleyball, wheelchair curling, and wheelchair basketball for the right to be named ParaTough Cup champion. All teams committed to raising at least $5,000 to enter, and additional points in the competition were on offer for those that raised additional funds.

Several Paralympians and Para athletes, such as two-sport star Cindy Ouellet, three-time Paralympian in athletics Josh Cassidy, and Sochi 2014 bronze medallist Kevin Rempel joined the festivities. They shared their stories with participants and helped out at the stations.

“It was eye-opening to get to talk to some of the athletes in terms of understanding their training routines, and the challenges that come with that, and all the work that goes into working towards their goals,” said Derek Louis, a member of Petro-Canada’s team. “It’s really awesome to connect with them and hear their side of things.”

Emceed by Scott Russell of CBC Sports, the day was enjoyed by participants and athletes alike.

“The day has been a lot of fun, it’s great to see all of the sponsors here and they all seem to be having a great time,” said Erin Latimer, a two-time Paralympian in alpine skiing. “It’s fun that they are able to have a chance to try the sports because most people have only seen them on TV, and so it’s just a really cool experience to be able to participate in the sport. I’ve been hearing people say it’s a lot tougher than they expected.” 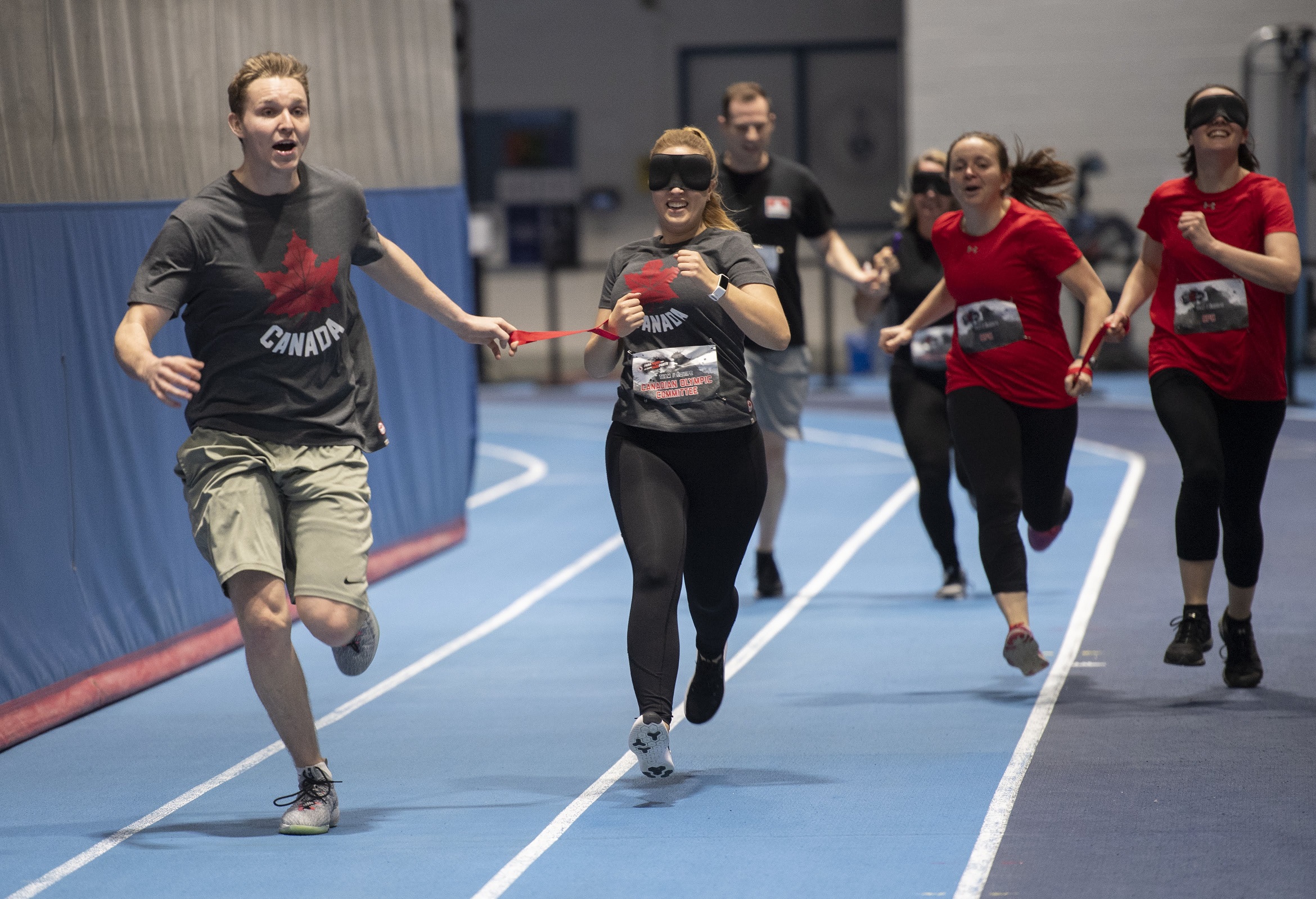 Andrew Haley, a Paralympic champion in swimming, has been part of all three ParaTough Cup Toronto events and says it’s important to give back and help spread awareness about Para sport.

“This is always a great day. It keeps getting bigger and better,” he said. “The participants love it, they like to try the different Para sports, and see how tough it is, and just come out and raise a lot of money for a really great cause and help grow the Paralympic Movement in Canada.”

Ultimately, the athletic prowess of the Toronto Blue Jays squad came through the thrill-infused afternoon on top, winning the prestigious trophy for the second year in a row. The top three fundraising teams were Performance Coaching, Hudson’s Bay Company, and Pfizer, who combined raised over $26,000.

Ultimately, the participants came away with a better understanding and appreciation of Para sport and Para athletes.

“I think it’s important for any person to put themselves in someone else’s shoes to see what they go through and the challenges they face to be able to do what they want to do and what their passion is,” said Laura Mastrandrea from Team Bell.

“I’m so thankful for being part of this and really learning and understanding someone else, so moving forward I can educate others on the event and how amazing it is, and hopefully it brings more awareness to the Paralympics in general.”

The 2018-19 ParaTough Cup season will conclude with its debut event in Calgary on March 6. Through events in Montreal, Vancouver, and Toronto this year so far, ParaTough Cup has raised $256K for the development and growth of Paralympic sport across the country.