The 23-year-old Guimond, from Gatineau, Que., won Canada’s only medal at the first two World Cups last month in Austria and Switzerland. He earned an award off the slopes as well, as he was named the Outaouais region international Male Athlete of the Year.

‘’I’m happy with the start to the season so far,’’ said Guimond, a Paralympic Games bronze medallist in the Super G in 2022 and giant slalom in 2018, looking for his first world championship medal since 2017. ‘’I’ve been very consistent, but I want to push the envelope at the worlds and get the win.”

At the 2019 World Championships, Turgeon established herself among the elite Para alpine skiers with silver in slalom and bronze in both the women’s standing Super G and super combined. She suffered a quadricep tear in downhill training two days before her first race at the 2022 Beijing Paralympics. She underwent surgery in the spring and competed on the World Cup circuit last month posting four fourth-place finishes.

The downhill opens the competition on Saturday.

‘’This will be my first downhill since the accident in Beijing so I’m a bit apprehensive,’’ admitted Turgeon, 23. ‘’But for the rest I feel very confident and I’m ready.’’

Sit skier Kurt Oatway is the longest serving national team member. Like Turgeon, he missed Beijing 2022 due to a horrific injury suffered at the world championships held a couple months prior in Lillehammer, Norway. He was the Paralympic Games men’s downhill sit skiing champion in 2018 and is a threat for gold every time he races.

‘’My recovery from the injury is going better than I expected,’’ said Oatway, who broke his collarbone, three ribs, lacerated a lung, and tore two ligaments in his shoulder in his worlds mishap. ‘’I got full range of motion back and my strength is improving.’’

Rowland, also a sit skier, made his Paralympic Games debut in Beijing highlighted by a 10th place finish in the Super G. He was also a member of the 2022 worlds team and is looking to gain more valuable international experience in Spain.

Following Beijing, there was a major retirement on the Canadian squad as Alana Ramsay of Calgary hung up her poles after earning four medals over three Games including two bronze in 2022.

Other notables missing from the worlds team are Mac Marcoux of Sault Ste Marie, Ont., and Michaela Gosselin of Collingwood, Ont., both recovering from injury this season while Mollie Jepsen of Whistler and Katie Combaluzier of Toronto are focusing on school.

Also Will Marshall is the new head coach of the Canadian Para alpine team replacing Jean-Sébastien Labrie, who had 16 years at the helm.

The worlds open Saturday with the men’s and women’s downhill races followed by the Super G on Sunday. The super combined is January 24, giant slalom January 25-26, slalom January 27-28 and the parallel races January 29. 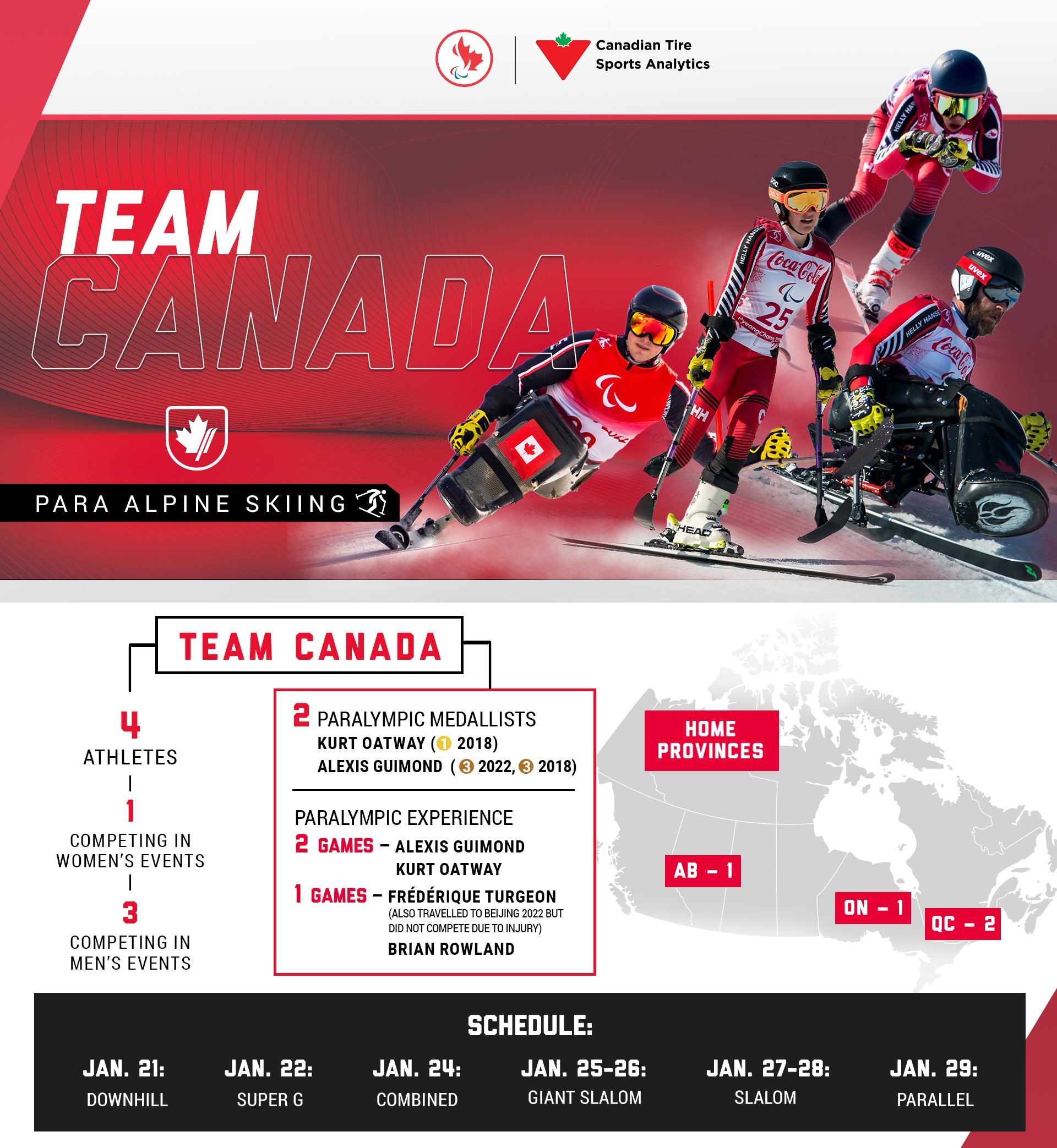