October 19, 2018
Three-time Paralympic medallist Tristen Chernove is right where he wants to be

Three-time Paralympic medallist Tristen Chernove is right where he wants to be ahead of Tokyo 2020.

“This past season was a reflection that I’m on the right path, things are working. The acceleration of the level of the whole field is amazing and it was really good to see that I’m rising to the challenge as well.”

A gold, silver, and bronze medallist at his first Paralympic Games at Rio 2016 – for which he won Best Games Debut at the Canadian Paralympic Sport Awards – Chernove claimed another world title at the Para cycling road world championships in Maniago, Italy this August.

Competing in the C2 category, the road race this year had a mass start with time gaps between classes. However, the C2 class caught up with the C3 racers, which resulted in a bunch finish. An endurance racer, Chernove prefers to win by breaking away rather than the risks involved with several cyclists altogether at the end. But, he was able to clear his head and utilize his recent sprint training.

“I ended up on the front as soon as we rounded the last corner onto the cobbles for the finish,” explained Chernove, who was diagnosed with Charcot-Marie-Tooth disease in 2009. “I didn’t really want to be dragging others along in my draft but it’s just the way it was, so I just went as hard as I could.

“This is the first year I’ve really put a lot more focus on strength training and working on the sprint. It was really my focus over the winter and I was able to test it, that’s for sure. And the power was there to hold it and so it was really satisfying to win.” 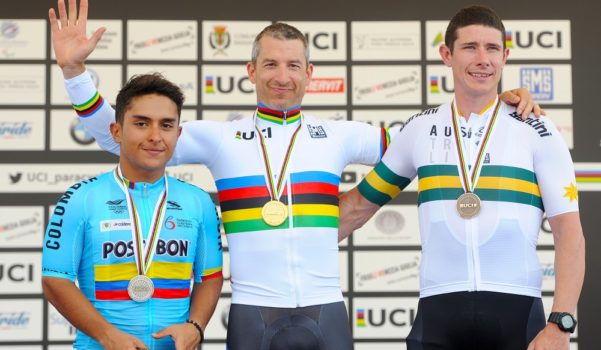 With an already successful season to his name, the 43-year-old from Cranbrook, B.C. says he felt in-form and relaxed heading into Italy. He spent a lot of time this summer with his local able-bodied team – including winning a 260-kilometre race – and accumulated more road racing experience than ever before.

Chernove, who also won the silver medal in the time trial race at the road world championships, says he will be emphasizing his dedication to training as opposed to results over the next year as he drives for Tokyo.
And looking ahead at the next Paralympic Games, he has big aspirations.

“As athletes we always want to do better than we’ve done before, so my goal is to have a better outcome than the previous Games in Rio. This time I’m hopefully not going to get crashed out in the road race, so I want to go for medals in all four events and going for a medal, you can only be thinking of the top step.

“My goal is four gold medals in Tokyo.”

With less than two years to go until he’ll hit the start line, Chernove appears ready to put in the work to do just that.