ParaTough Cup made a successful debut in Vancouver last Friday, raising a total of $55,000 for the development of parasport in Canada.

“Parasport truly levels the playing field, so we all get to simply be,” Dueck told the crowd before kicking off the competition. “It reveals the humanity in all of us, it gives us an opportunity to excel, to shine, to work hard and cultivate our gifts and then share that with the community around us.”

The signature fundraising event of the Paralympic Foundation of Canada, this was the first ParaTough Cup held on the West Coast following two iterations each in Toronto and Montreal. ParaTough Cup has now raised approximately $475,000 to help people with a disability become involved in sport and access the resources to reach the next level.

“It was an eye-opener for me because I’ve always watched the Paralympics from a distance and you never realize how hard it is until you get to do it yourself,” said Isabelle Louise, a sales rep with Team Petro-Canada. “It’s very challenging, and it’s really competitive too so it was a very good experience for me, very positive.”

Designed as a corporate team-building fundraising event, the participants had the chance to experience a half-day of friendly competition with their co-workers.

“My day today was incredible. I got to hang out with my colleagues and be challenged and find out what I’m not good at!” laughed specialty sales rep Heather Staples from Pfizer Canada, who also was one of the top five individual fundraisers.

“In general I’ve always been pretty impressed with Paralympic sport and Paralympians, but it was just enhanced today, learning more about the challenges and the amazing things they do and it’s such a positive thing for people to see there’s still a way to be involved in sport and be active.” 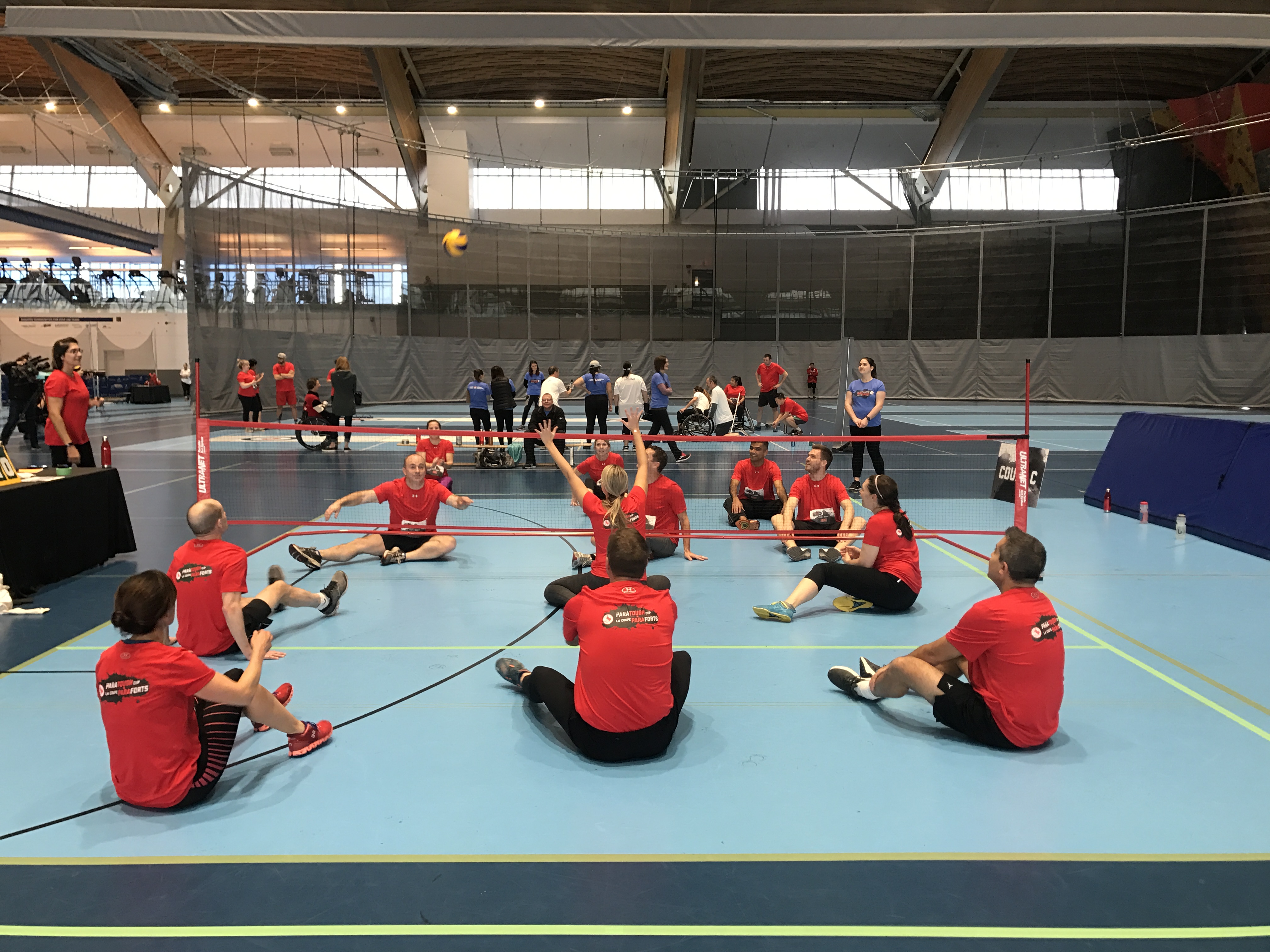 A few Paralympians were on hand to help out at the sport stations, including wheelchair basketball Hall of Famers Marni Abbott-Peter and Richard Peter, Rio 2016 sitting volleyball star Felicia Voss-Shafiq, and Paralympic snowboarder John Leslie.

Abbott-Peter says she was happy to give back and be part of the event, and hopes the participants come away with a better understanding of what it takes to succeed in parasport.

“I think it’s really important for them to understand some of the equipment, for example, and giving them a chance to try the sports helps ingrain it – seeing the equipment and understanding the cost of it and those kinds of things probably would motivate them more to be involved."

“When they have an experience like this it will help to grow the event and make it bigger and better next year.”

Team RBC, led by Paralympic swimmer Michael Edgson and several of his colleagues, took home the trophy. They inched out the victory by a two-point margin over Petro-Canada thanks to their top scores in the Para ice hockey and wheelchair sprint challenges.

“Today was absolutely extraordinary,” said Edgson. “This is something we need to do in Vancouver, and we should be doing here more. When we talk about diversity and inclusion and some of the challenges Paralympians face as athletes, this event is bringing everything we want: the attention, the awareness, the competitiveness.”

Edgson says he’s already hoping to build on that competitiveness with RBC offices across Canada’s major cities where ParaTough Cups are held.

Next on the calendar is Toronto on February 22, 2019. It will be the third time the event is hosted in the city, where ParaTough Cup was first held back in early 2017.