July 22, 2019
All four players will be making their Parapan Am debuts

Lima 2019 marks the first time the quad classification in wheelchair tennis, a mixed gender category for athletes who have impairments affecting both their upper and lower limbs, has been added to the Parapan Am calendar. Canadians Rob Shaw and Mitch McIntyre will be among the first quad athletes to compete at the Parapan Am Games.

Shaw is the highest-ranked member of the Canadian wheelchair tennis team at world No. 8 and is the reigning four-time national quad singles champion. He reached the Top 10 for the first time in 2018 when he reached his biggest career final on home soil, the ITF 1 series Birmingham Classic. He holds an 18-5 match record in 2019 so far, including three ITF titles.

“Four years ago I was selected as a torch bearer for the 2015 Parapan Am Games in Toronto, and I never imagined being able to compete in them four years later,” said Shaw. “Qualifying for Lima is the biggest accomplishment of my sporting career thus far and I can’t wait to represent Canada at my first multi-sport Games.”

Also competing in the quad draw will be McIntyre, currently ranked a career-high world No. 27 in singles. Shaw and McIntyre, who both also helped Canada to a sixth-place finish at the World Team Cup tennis event earlier this year, will be competing in singles and teaming up together in doubles should there be enough teams for a draw.

Two athletes will be competing in the men’s tournament in Lima – Thomas Venos and Jonathan Tremblay. At 20 years old, Venos is the youngest of the group and has been on the rise since starting the sport under four years ago. He is Canada’s No. 1 men’s player with a world ranking of No. 111, and recently helped the University of Alabama win a national championship.

“I am very happy and honoured that I was able to qualify and be chosen to compete for Canada at the upcoming Parapan Am Games in Lima,” said Venos. “This will be my first time going to an event of this magnitude with not just tennis being the main sport but also many other sports taking place. The competition there will be amazing and I am looking forward to it. Go Team Canada!”

For his part, Tremblay is ranked world No. 180. Both Venos and Tremblay will enter the singles draw in Lima and pair up for the men’s doubles tournament.

Shaw and Venos both qualified for a spot in Lima based off their world rankings as of July 8, while McIntyre and Tremblay were the recipients of Bipartite Commission Invitation slots as allocated by the International Tennis Federation.

“Congratulations to our wheelchair tennis players and welcome to the Canadian team!” said Stephanie Dixon, chef de mission of the Lima 2019 Canadian Parapan Am Team. “I’m so excited that we have four athletes who will be experiencing their first big multi-sport Games and I can’t wait to support you in your journey at the Games. You have earned your spot to represent Canada on the court and I hope you have an amazing experience!”

Wheelchair tennis action in Lima will start August 24 with men’s singles action and conclude August 30 with the quad singles final.

“Congratulations to Rob, Mitch, Thomas and Jonathan for qualifying to represent Canada at the Parapan Am Games in Lima,” said Kai Schrameyer, national coach, Tennis Canada. “This is a fantastic opportunity to experience a multi-sport Games and compete for a place on the podium. The team is excited to take the court in Lima and has been training hard to be ready for their first ball.” 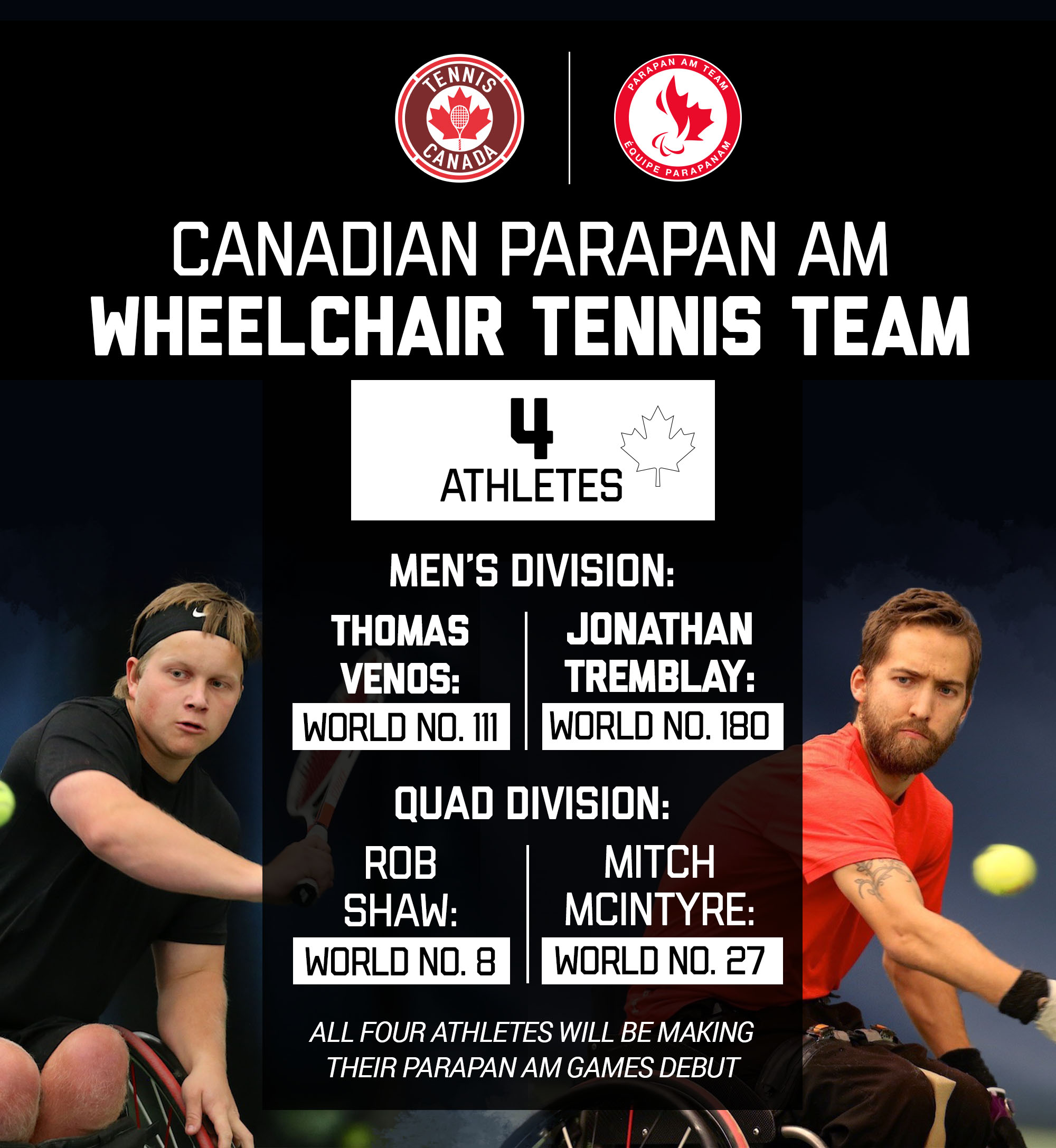